Girl wanted to make pancakes this morning for Nana and Uncle J, who had to fly home today.

After breakfast Uncle J took the dog out back to play for one last time, while Nana got things packed up. Then we drove them to the airport. It’s always hard to say goodbye, but we’ll see Nana in April. 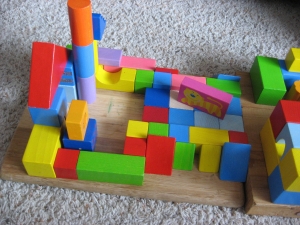 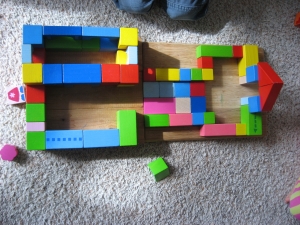 When we got back the kids played with colored blocks. Girl had built a ‘skate park’ before we left, but when we got home they worked together on a camp. Then Girl went on PBSkids.org while I covered a couple of units in Boy’s math textbook: Halves/Quarters and Telling Time. He did some of the exercises, and he’ll probably finish them tomorrow.

Both kids had ballet tonight. While they were in class I walked to the local comics store and bought the kids their first comics: My Little Pony for Girl, Scooby-Doo for Boy, and also a very nice kids’ graphic ‘novel’: Zita the Spacegirl. Boy’s interest in reading has waned in the last few months, so I’ve been thinking of ways to jumpstart it, to give him things that he just can’t help but read. He loves mystery and adventure, he loves pictures; comics seem like a great possibility. Two other ways they might help: the absence of narrator means that you have to ‘read between the lines’ a lot in comic books (and especially graphic works like Zita): you have to be able to get the inferences to understand the story. That’s good exercise for Boy. Also, if he really loves comics, is it possible they could inspire him to draw and write more? That would also be fabulous.