This morning Papa made french toast from baguette, and then everyone got dressed and went outside to play, and the kids rode their bikes around the back yard. Girl put shin guards over her leggings, wore her bike helmet and some mittens, for extra exciting action appeal. Papa and Boy also shot some hoops.

Then we went out front to look at the garden the kids started in the fall–the early spring bulbs they planted are coming up. 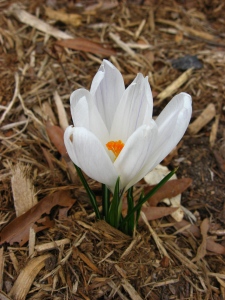 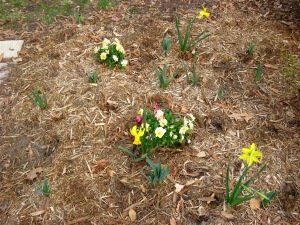 After that it was time for my dentist appointment, but I brought Boy with me so he could read in the waiting room while I got my teeth cleaned. He likes doing that. And I didn’t want to leave Papa with both kids, because they’d been kind of fighting, and Papa isn’t feeling very well.

When we got home we had lunch, and then Papa took the kids to our brand new very fancy main library. They explored the building, chose books, and played video games. Girl got to be Hulk as an avatar, and I don’t know what the goal of the game was supposed to be, but she told me with bright eyes that she smashed everything. Boy wanted a book about WWI, so he approached a children’s librarian with a very respectful, “Excuse me, ma’am…” and she helped him choose three books. Papa said they were talking for a while. While Boy read, Girl played in the play area, setting up her own store.

When they got home, after dinner, Papa spotted a hawk in the live oak out front. Boy could also see it, and described it to Girl, both plastered against the glass in the big front window, but Girl never could spot it. She even missed it as it flew away, prompting her to start weeping in fine Girl fashion.

Boy drew a picture of the hawk for her, flying away as the sun set in the west, and coloring the sky a beautiful orange-pink, per her request. It made her feel better. 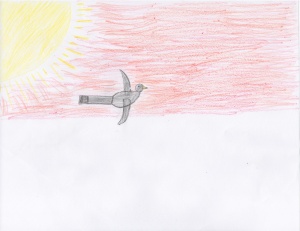 Today Boy had violin and ballet, and Girl could stay home with Papa.

In between those things we went to Boy’s second counseling appointment, and to the library to pick up books about Cuba, Jamaica, and The Bahamas (for Geography Club).

Before we went into the counselor’s office, we had about 15 minutes to spare. I knew Boy was hungry, and we were right by a very nice market. We went in and picked out some fancy snacks (something we don’t get very often). We picked out a box of cookies from their bakery, then went to the olive bar for me. Boy asked if he could try some olives, so we looked for a couple of kinds without pits. He picked out some big green olives stuffed with feta cheese to try. Then we got dehydrated veggie chips, and a honey bear filled with blue M&M type candies from the wall of old-fashioned candies. Then we walked across the street with our bag, and boy ate his olive outside before we went in.

Boy and I both talked to the counselor for a bit, then I went back out into the waiting room so they could have time alone. It’s hard for them to get to know each other when I’m in the room, since I tend to do most of the talking. When we left, I asked him how it was and he said fine, that he liked the counselor. He told me that she asked him why he thought his mom was taking him to see her. He told me that he answered: “Because she doesn’t want me to be unhappy and not be able to do things that should be fun.” I’m glad that’s how he feels about it, and not that we think he’s been ‘bad.’