Girl woke up not feeling well today, so long story short she spent a couple of hours hanging out in one of the bedrooms of our host’s house, on the bed, looking at books and finally falling asleep cuddling her blankie.

We covered the Eastern US in Geography Club. Boy had a meltdown about coloring slightly outside of a line on his American flag, so I had to carry him out of the house whilst he was trying to throttle me, and then stand outside the van while he calmed himself, but eventually we were able to return and he ate lunch and played for an hour.

The club activities as a whole were a success.

Here is the discovery table Miss P and I put together today. 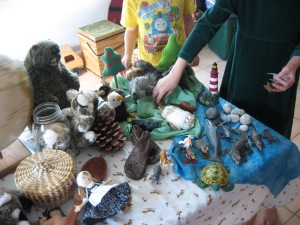 After the kids explored the table for a bit, Miss P showed them the Eastern US on a map, and talked to the kids about the Mississippi River, and how it divides our country down the middle. The Eastern US is what is to the east of the Mississippi. They talked about things that were in the Eastern US: particular cities, mountains, and some special things about the east that were shown on the discovery table. What kind of animals, what kind of forests and natural environments, what people lived there and settled there, and some other things like the fact that the first factories in our country were built in the Northeast, to manufacture things like shoes.

After that I read two books to the kids, one about a walk in a northeastern forest, and the things the kids find there, and then a second about what it was like to live in a cabin in the Appalachian mountains in coal country. The kids were completely engaged with both stories, which is of course extremely gratifying to the story reader (in this case: me).

Then I went to go read a story to Girl (Cinderella, which was pretty perfect considering that she finished building her Lego Cinderella castle this morning, and she LOVED the story, a very nice version), while Miss P had the kids hold on to a series of blue silk scarves tied together, and march around the house pretending to be the Mississippi River, chanting: M-I-S-S-I-S-S-I-P-P-I.

We spent a little time looking at the books on the literature table before we moved on to activities: cutting apples for an apple pie (which the kids subsequently ate) and coloring their flags and maps.

Of course, coloring is where it went wrong for Boy today, but at least he made it back inside in time for playtime and potluck lunch. Today we had homemade Boston baked beans, hotdogs, brown bread (the traditional New England molasses bread, cooked by steaming in a can, which is what we brought), pasties, muffaletta, chocolate cake, apple pie. It was a great lunch.

I occurred to me on the way home that maybe Boy should sometimes practicing making messy letters and scribble-scrabble coloring on purpose. He thought that was a great idea, and did a little of that when we got home. He was still pretty touchy for the rest of the day, though.

Tomorrow we’ll be missing co-op since Girl is sick, so maybe I can (finally) catch up on a few things.