Today was the kind of day that illustrates an important point about homeschooling in general, and unschooling in particular: some days really don’t go like you planned, because life’s like that, and you have to make the best of what comes your way.

What I didn’t say about yesterday is that Papa wanted to go to Moe’s for dinner to take advantage of ‘kids eat free’ on Sunday, and to give me a break because I think I was very obviously tired after the trip. When we got in the van, though, the engine was revving up and down dramatically, in a way that made it clear that a trip to the mechanic was in order. Since it was a gorgeous evening, we simply walked the mile to Moe’s (and had another great evening there), but this morning I needed to deal with the van.

This was somewhat heartbreaking because I’d worked really hard the last couple of months to set aside $500 for Christmas (presents, tree, dinner, and so forth), and I knew that would be greatly diminished or gone by the end of the day. But we just needed to bite the bullet. Next week is Nutcracker week, so Boy will need to be at a theater a half hour away nine (!) separate times from Tuesday to Sunday for dress rehearsals and performances. It’s not like we can not drive the van.

The other complication was that Girl was supposed to go on a Daisy Scout outing to the zoo this morning, but her Daisy Scout leader is our neighbor, so I just asked if she could bring Girl, too.  I thought about bringing the van to the dealer, but it’s so far away, and I was afraid we wouldn’t get it back in time to go to ballet tonight. So I decided to call the auto shop a couple of miles from here and tell them about the revving. Since we needed an oil change and state inspection anyway, I just asked them to do it all. Boy packed a bag with some books and a drawing pad, and we drove down and dropped off the car. There’s a city park with playground equipment right around the corner from this shop, so Boy and I walked there. It was another gorgeous day. 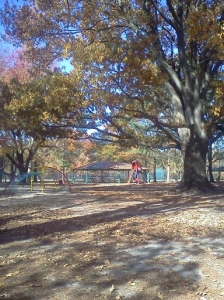 We got there around 10:30. We were the only people there. Boy immediately started climbing on equipment, practicing things that are kind of hard for him to do. Especially climbing over the arches, and swinging hand to hand across the ladder. He spent time watching bugs. He tried to make a little house of sticks, but they kept falling over.

I told him it was a good time to learn how to tie knots (something I’ve been meaning to do forever) since he’d be able to tie the sticks together. So I showed him how to tie a double knot using the stem of a leaf, and we worked on that for a while.

I talked to him a lot about how to pick things outside that are good to tie with: the longer the better, thin enough and soft enough to bend, but thick enough and strong enough not to break. Beware of brittle or dry things.

After that Boy swung on the swings while we waited for our neighbor to drop Girl off. By this time it was after noon, and we were starting to get hungry. When Girl arrived, my neighbor said she’d come back and get us if the car wasn’t going to be ready today, or just if we needed a ride. I told her I hoped the car would be ready in time for us to get to ballet tonight, but was very appreciative.

I called the mechanic; they’d done the oil change and the work necessary for inspection, but were just starting to look into our other issue. I spotted a big live oak way across the park that looked like it might be good for climbing; the kids and I decided to go check it out while we waited for the news (and ignore our rumbly tummies a little longer).

The kids had fun for a while climbing up into the tree, and Boy had fun jumping out of it. Girl was a little nervous at first, so I had to hold her hand while she climbed up (she’s pretty scared of bugs) but after a while she was doing it by herself.

We got a call back from the auto shop; the idle motor needed to be replaced, and the car would be ready at 3pm or so. Also the bill was going to come to almost exactly $500. (We’ll figure out something for Christmas. We’re good at that, Husband and I.)

The immediate issue was food. There weren’t any restaurants nearby that I would ever take Boy and Girl into (both because of food quality but also just general sketchiness). But we really had to eat. We walked up to the main road and Lo and Behold there was a Rite Aid that I hadn’t really noticed. So we went and got snacks. And you know, Rite Aid has better stuff than you’d think. I got pistachios, trail mix, crackers, and chocolate covered mint cookies. And a Starbucks coffee in a bottle for myself. (The kids had a water bottle.) We walked back to the park, laid out a beach towel that I’d thrown in my bag in the morning, and had a picnic. It was all great. While we were eating, a mom and little girl walked up to us; the little girl had spotted the kids and wanted to play. We promised we’d come find her when we were done eating.

There were several groups of people in the park now that it was afternoon. Some moms and grandparents with very small children, three teenagers (two boys and a girl, probably skipping school, and from what I could see, exceedingly sweet), dog walkers and exercisers. Girl played with her new friend for an hour or so, and Boy played with them on and off. I could see Girl showing her friend how to do stuff on the monkey bars. I was sitting pretty far away, and I thought for a bit how happy I was to be sure that my kids were playing nice, even if I couldn’t hear them or see them very well. Because they do. They are Nice Kids. (Well, to just about everyone but each other!)

After a while almost everyone left, the kids swung on the swings for a while, and eventually I decided we’d walk back to the auto shop and finish our wait there. At this point we’d been at the park for almost 5 hours.

At the shop they said it would still be another half hour (it ended up closer to another hour), so the kids sat on the old couch there, Boy reading, Girl drawing. They watched a little Ellen.

Girl decided to draw her Christmas lists: one for Santa, one for Nana, one for Aunt S.

We typically ask Santa for one present, and one stocking stuffer. (I tell them there isn’t room in the sack for more than one big present per child.) Santa always brings them a new pair of jammies and puts them in their stockings. I told them Papa and I weren’t going to be able to buy presents this year, though we would still be having a tree, a big dinner, and advent chocolates. So I think Nana got some gift-desire overflow.

And for the record, I have no idea what a ‘Chickens Fly’ playground is; neither do I know how I’m going to come up with a toy rainforest from Santa.

By the time we got the van back (thank you so much, mechanics who we like very much!) it was almost time to go to ballet. So we drove straight home and literally ran around the house getting stuff on, letting the dog out to pee, and getting back in the van. We made it there with not a minute to spare.

When we got home, Papa had fed the dog and taken her out to play (in the dark!) because she’d been in her crate all day. I made dinner, and realized that I was supposed to make cookies for Girl’s Daisy Scout meeting at co-op tomorrow. Papa washed dishes while I cooked, and after dinner said he’d make the cookies, too. Papa doesn’t do much homeschooling directly, but we couldn’t do it without him.

Those cookies are sitting out there on the cooling rack right now. I’m going to clean up the kitchen and go to bed. Tomorrow is co-op.

But did I mention? My kid learned to tie knots today!! He swung on the monkey bar ladder from one side to the other for the first time!! We spent five hours outside in gorgeous weather on the first day of December!!

That’s a good enough day for me.