It was nearly 70 degrees today, so we pared down our obligations to the bare minimum (driving to the ballet store for Boy’s new shoes, ballet class for both kids at 4:30) and spent as much time as possible outside.

First thing this morning the kids made me a birthday present and a card, put it in a box, wrapped the box with ribbon and a bow, and put the whole thing in a gift bag. My birthday is tomorrow. (Evidently, though, Girl put some of her own things in the box, and at bedtime started weeping and asking if she could take them out. I guess she overreached her own generosity a little. So we unwrapped, removed the items in secret, and wrapped again.)

After they were done preparing for my birthday, though, the kids headed outside. They wanted to build fairy houses in the back corner of the yard, where we say the fairies live. They started building something with sticks, using my weed prong as a post hole digger, but then Boy got it in his head to use bricks, making a roof of sticks and magnolia leaves. I’ll grant that it’s a little less ethereal than your average fairy house, but neither shall it blow away in the storms we are expecting. 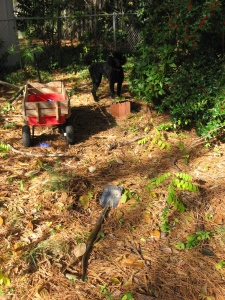 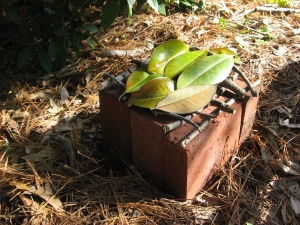 I made lunch for the kids and served them outside on their little table. And after a brief trip inside for more snacks and potty, the kids went back out to mulch their garden. I cleaned off the paving stones that make up their walkway, emptied the bags of mulch into a pile and kind of showed them what they needed to do, and then left them to it. They did a great job, and now we can just leave the garden alone until spring. 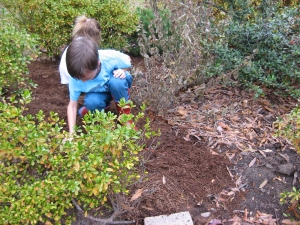 Afterwards, we went in for baths. I got the kids ready for ballet; mercifully, I am getting better at Girl’s ballet buns. While they were both in class, I walked to a coffee shop, read a book for a bit, then walked back to the school in the (unseasonably warm) almost-dark. When I got back to the school, Girl came running out to find me, acting kind of goofy.

So I knew something was wrong. While I was getting her street clothes on over her leotard and tights, she looked at me solemnly and whispered, Mumma. I did something bad in ballet class. When I asked her what happened, quietly, she asked if she could just tell me when we got home. Of course, I said.

Waiting for Boy to come out of his class, we saw Girl’s teacher, who just said that Girl needed to listen a little better, looking at Girl significantly. Now, I should mention here that to my knowledge, Girl has only been ‘spoken to’ in a class setting ONCE in all her years of Preschool, Sunday school, and co-op. (That single incident involved running around a table with two friends when she had been asked to sit, in her PreK-3 class. She told me about it immediately after getting in the van at carpool line, and insisted we ‘text’ her teacher to say sorry.)

In general, Girl admires adult women greatly (‘ladies’ we call them), and her teachers especially. She wants them to think nothing but good of her, desires to be seen as also a lady, and I exaggerate only a little when I say that she would rather die than suffer the shame of being ‘bad.’ She often behaves so badly when she comes home that we joke she used up all her good at school. It’s one of the reasons I was reluctant to send her to 5-day preschool this year. How could she possibly keep up that level of total compliance? In any case, when I saw how her teacher looked at her, one eyebrow slightly raised, I thought Uh oh. This is bad.  She answered her teacher politely, then buried her face in my shoulder, whispering in my ear: That’s not it. Not listening is not what I wanted to tell you.

A minute later, Boy came out from the back, already dressed and ready to go. The kids gave each other a big hug (as they often do now when they are separated for any length of time). We walked back to the van, and as I was leaning over Girl to strap her into her seat she said: I can tell you, now that we’re in the car.

We just looked at each other for a long moment. Her face crumpled. I was swinging on the bar. She buried her face in my sweater in shame and embarrassment. And she barely got out the words before she started weeping: And my teacher…YELLED AT ME. I…I held my crying the whole time until now…(Copious and noisy crying.)

Oh, you brave girl…Oh, honey, I know it’s no fun when someone yells at you, no matter if it’s a teacher or your mumma. I’m so sorry. And next week I know you’ll be so good.

But what if I’m not? she asked, her eyes enormous, and deeply worried.

Then I’ll still love you. So much. I couldn’t love you more.